We had heard such great things about Sandy Pines Campground and they all turned out to be true. We booked a couple months in advance and got the last RV site for the time period we were looking to visit Maine. Sandy Pines is located in Kennebunkport and is not far from downtown Kennebunkport and Goose Rocks Beach. We had never visited this part of Maine before and after a bit of research this seemed like THE place to stay. 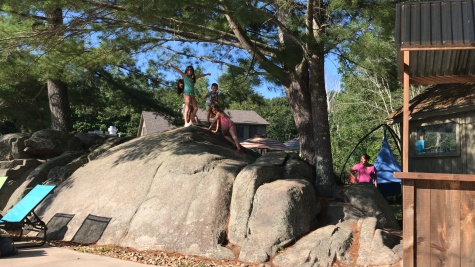 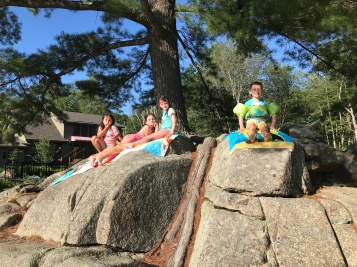 Sandy Pines had a terrific salt water pool flanked by boulders and lawn games. The kids loved playing on the boulders when they needed to heat up from the cold water (seems like all water is cold in Maine).  When we weren’t swimming with  the kids, we enjoyed getting goodies from the snack bar and listening to 80’s music from the outdoor speakers in the pool area.

We don’t have a lot of pictures of the playground although we did visit there. It was a bit small compared to the various campgrounds we’ve been to but it may be best suited for smaller children. The real playgrounds in these parts are the beaches. Many campers choose to go out in the morning toting kayaks, SUP’s and surfboards electing to come back in the afternoon and relax by the pool. Not a bad formula for fun and one we’ve followed when we can get the kids out early enough.

Sandy Pines also had many other accommodations for campers without RV’s. From cabins to glamping tents to Conestoga Wagons. The facilities were well kept and their were many activities. They had it all and if we visit this part of Maine again we will definitely be back.

Hiking Kennebunkport was quite a different experience. We left Sandy Pines in search of The Edwin L. Smith Preserve but ended up at The Emmons Preserve quite unbeknownst  to us. I just in fact figured out what had happened as I’m writing this post and researching. We followed directions for the Edwin L. Smith Preserve and ended up at The Kennebunkport Conservation Trust Headquarters (located adjacent to the Emmons Preserve). We then took a map for The Smith Preserve and proceeded to hike The Emmons Preserve with the wrong map in hand. We did not notice until a half mile in that none of the trail names and colors matched up. The very helpful man (lol) at the trust neglected to mention we needed to proceed further down a gravelly road to get The Smith preserve. We followed the learning trail and promptly left as it turned out we were walking through stagnant marshland just in time to provide thousands of mosquitos with a tasty lunch.

That’s why above I stated above: “if we visit this part of Maine again.” We missed Acadia National Park and all of it’s gems. Southern Maine is to beaches as Northern Maine is to mountains. We missed our hiking during this trip but we did have great beach experiences. You can see more of that in our previous post, “Beaches of Southern Maine”. Check out the video below to see Ryan’s first solo/unassisted  swim across The Sandy Pines Campground Pool and keep watching to see our seasoned hiking family get lost on a learning trail in some pretty buggy conditions.

Thanks for stopping by and stay tuned as we head out in search of days long ago and  seafaring past on our next adventure.

This was our third summer in a row camping in Maine. We’ve previously stayed in Bar Harbor and The Schoodic Peninsula. This year we were looking forward to a shorter drive to Kennebunkport. While Kennebunkport didn’t have  as much hiking as we’re used to (more about that in the next post), it did have some absolutely beautiful beaches. That’s why this post is “Mainely” about beaches!

Goose Rocks Beach was the first beach we visited as it’s only one mile from Sandy Pines Campground. You have to buy a $25 daily parking pass like we found out for many of the beaches in the area. You’re not promised a parking spot so plan to arrive early. As we arrived the whole area was masked by thick sea fog. We could not even see the land in the distance that’s shown in the picture below with Ava on the towel. We also arrived at low tide. There were boats adjacent to us laying on the hard and we were able to walk almost a half mile out on the fine sand. We finally got to the water and it was crystal clear, but really cold. Our kids don’t seem to be affected nearly as badly as we are of the cold water but I did hear them exclaim that their feet were numb and frozen! This beach has nice gentle waves at low tide and bigger ones at rising and high tides as the jetty across from the beach submerges and allows the full force of the Atlantic Ocean surge in. The tide came in we backed our towels up nearly a dozen times as we finally ended up right at the foot of the properties on Kings Highway. We were able to explain to the kids about the tides and force of the moon and they got to witness the effect first hand. 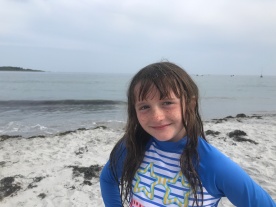 We met some friends at the campground by chance and they told us they were splitting their week in Maine by staying a half week in Ogunquit. We decided to take the scenic 45 minute drive to see what the hype was about. Bunches of quaint shops and restaurants line the streets of this busy town. Ogunquit is also known for it’s beach which we didn’t have the time to visit but we did walk The Marginal Way which takes you on an oceanside path up to the cliffs for panoramic views. We made numerous stops along to search in tide pools and climb on rocks until we were hurried back to the car by some incoming afternoon thunderstorms that turned out to be quite severe. 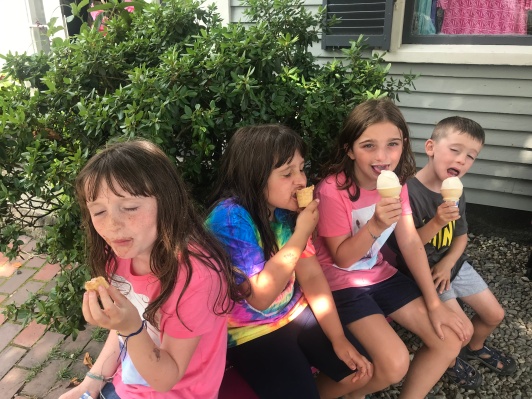 Another Southern Maine gem can be found at Mother’s Beach in Kennebunk. We found parking immediately entering but had to once again pay the daily $25 fee. I can’t complain as we spent enough time at these beaches to make it worth the cost. It also must serve to keep things in their beautiful state. Mother’s Beach is known for it’s playground and our kids did love it! The waves are a bit rougher then Goose Rocks Beach but the kids enjoyed the new challenge, getting knocked down and dragged in by the surf. I had no idea Ava could submarine so well under the waves. She’d duck under the larger ones coming up on the other side! She got caught a few times but it didn’t seem to phase her. These kids are fascinating! They always seem to impress this proud papa in different ways. 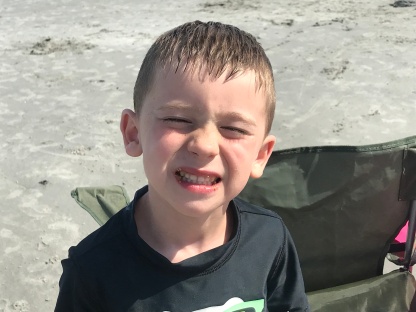 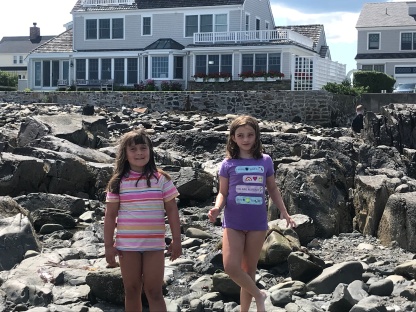 We also had a great time exploring the tide pools at Mother’s Beach. Looking for crabs and snails and building sand forts that eventually would flood as we had to move our spot further and further back almost to the street as the tide with it’s impressive range made it’s way in.

Not really a beach but the memorial park at the tip of Cape Porpoise kept the kids entertained for a couple hours. When we weren’t helping the kids catch crabs under the rocks we were able to enjoy view of The Goat Island Light as well as a stunning sunset. 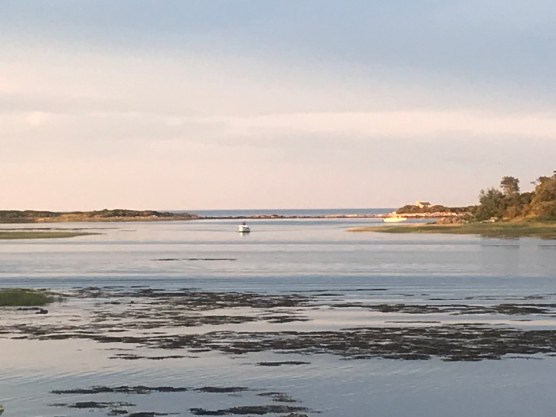 The Cape Porpoise Memorial Park is directly across from The Cape Pier Chowder House on Pier Road. We actually went here twice after eating at the chowder house. The kids caught a few tiny crabs which we released after befriending them. 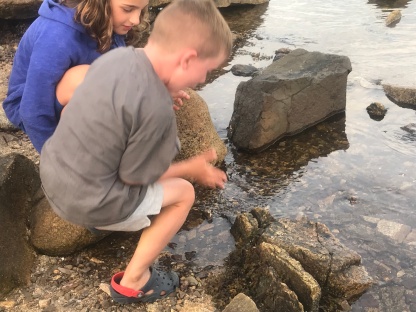 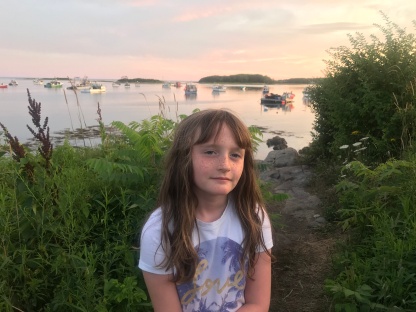 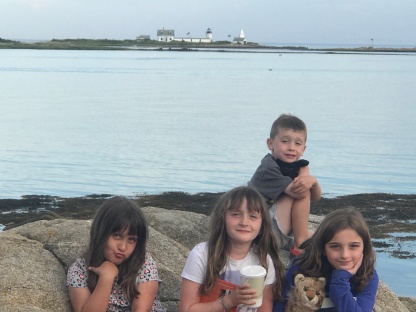 As mentioned above, we dined here twice during our weeklong stay. The food was great! Great chowder and scallops an of course, lobster. We discovered that Ava can eat a whole 1 1/2 pound lobster by herself as you’re eating your soup. Then she asks you if you’re going to eat your whole lobster! We came the first day we arrived a bit on the late side and had a bit of trouble finding a table. We arrived around five for our second dining experience and were able to sit right down. Earlier is better during the summer in Maine. One of the parking attendants asked us why all us out-of-towners seem to wait until 7 o’clock to decide go to dinner. Honorable mention to Noonan’s Lobster Hut as well for great lobster at good prices. Check out the slideshow below to well behaved kids enjoying the lobster shack experience.

There’s a real good reason we’ve been to Maine the past three summers. It’s so beautiful and there’s something for everyone to do. That’s the hard decision when Rv’ing. How do go out in search of new states and experiences when there are so many places you want to go back to?

Feel free to check out our video below capturing our Southern Maine Adventures and please stay tuned as we’ll cover Sandy Pines Campground in our next post. Thanks for stopping by.