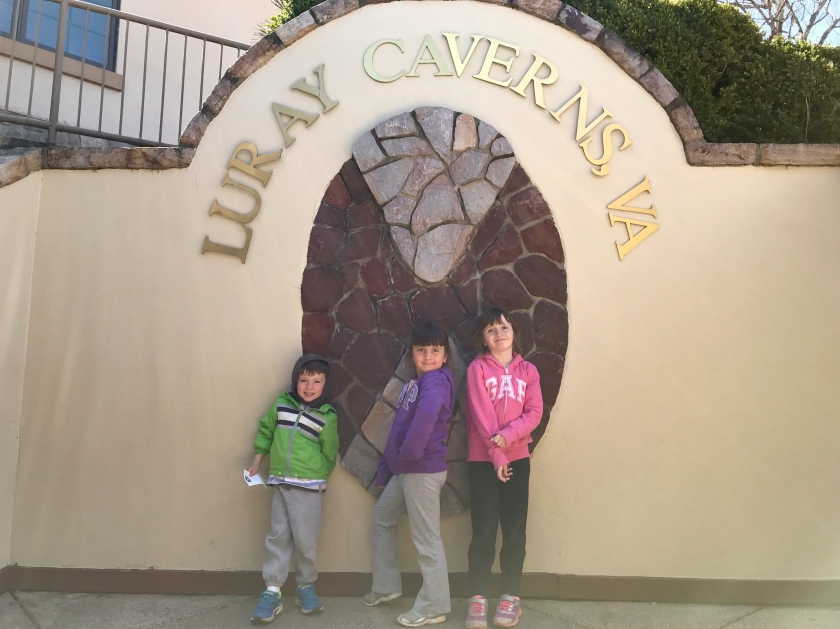 Who can stay in Luray without visiting Luray Caverns? The campground we were staying at was only maybe ten minutes from the caverns but Ryan and Ava still managed to fall asleep in the Jeep on the way over. They were probably exhausted from jumping on the bounce pillows the entire day before. Linda and I decided to let them sleep a bit so I took Sarah to the adventure park beforehand. we were fitted for harnesses and went on up promptly. There were three levels, one just for little kids and the next two levels were age appropriate for Sarah only I had to be with her. I’m glad to say we conquered the second level and a bit of the third level although a bit apprehensively.  After the initial fear Sarah really tackled most of the ropes effectively. I’m not proud of getting kicked out of the adventure park for using my iPhone to record Sarah but we did get to spend about an hour climbing and balancing before going back to the the parking lot to round everybody up to see the caverns.

Luray Caverns covers 64 acres and was discovered in 1878. The inside temperature is a constant 54 degrees so I would recommend sweatshirts. It’s also a great rainy day activity if you don’t plan on doing the adventure park because all of the museums and shops on property are inside and the caverns themselves are entirely underground. The kids were mildly amused but would have preferred there wasn’t a “no touch” rule for many of the rock formations. Linda thought parts of it looked fake but I think that it’s one of the wonders of the world and you just have to believe. It’s estimated the caverns were formed millions of years ago but were just made a Federal Landmark in 1978.

Be sure to check out the caverns and adventure park in the video below. Thanks for stopping by and stay tuned as we’ll take you on the Shenandoah River next.